Edited 18 Oct 2019: we need to set the random seed in each process so that the models are initialized with the same weights. Thanks to the anonymous emailer who pointed this out.

Edited 30 July 2020 to clarify the meanings of nodes and processes.

The easiest way to speed up neural network training is to use a GPU, which provides large speedups over CPUs on the types of calculations (matrix multiplies and additions) that are common in neural networks. As the model or dataset gets bigger, one GPU quickly becomes insufficient. For example, big language models such as BERT and GPT-2 are trained on hundreds of GPUs. To perform multi-GPU training, we must have a way to split the model and data between different GPUs and to coordinate the training.

I like to implement my models in Pytorch because I find it has the best balance between control and ease of use of the major neural-net frameworks. Pytorch has two ways to split models and data across multiple GPUs: nn.DataParallel and nn.DistributedDataParallel. nn.DataParallel is easier to use (just wrap the model and run your training script). However, because it uses one process to compute the model weights and then distribute them to each GPU during each batch, networking quickly becomes a bottle-neck and GPU utilization is often very low. Furthermore, nn.DataParallel requires that all the GPUs be on the same node and doesn’t work with Apex for mixed-precision training.

The existing documentation is insufficient

In general, the Pytorch documentation is thorough and clear, especially in version 1.0.x. I taught myself Pytorch almost entirely from the documentation and tutorials: this is definitely much more a reflection on Pytorch’s ease of use and excellent documentation than it is any special ability on my part. So I was very surprised when I spent some time trying to figure out how to use DistributedDataParallel and found all of the examples and tutorials to be some combination of inaccessible, incomplete, or overloaded with irrelevant features.

Pytorch provides a tutorial on distributed training using AWS, which does a pretty good job of showing you how to set things up on the AWS side. However, the rest of it is a bit messy, as it spends a lot of time showing how to calculate metrics for some reason before going back to showing how to wrap your model and launch the processes. It also doesn’t describe what nn.DistributedDataParallel does, which makes the relevant code blocks difficult to follow.

The tutorial on writing distributed applications in Pytorch has much more detail than necessary for a first pass and is not accessible to somebody without a strong background on multiprocessing in Python. It spends a lot of time replicating the functionality in nn.DistributedDataParallel. However, it doesn’t give a high-level overview of what it does and provides no insight on how to use it. (https://pytorch.org/tutorials/intermediate/ddp_tutorial.html)

There’s also a Pytorch tutorial on getting started with distributed data parallel. This one shows how to do some setup, but doesn’t explain what the setup is for, and then shows some code to split a model across GPUs and do one optimization step. Unfortunately, I’m pretty sure the code as written won’t run (the function names don’t match up) and furthermore it doesn’t tell you how to run the code. Like the previous tutorial, it also doesn’t give a high-level overview of how distributed training works.

The closest to a MWE example Pytorch provides is the Imagenet training example. Unfortunately, that example also demonstrates pretty much every other feature Pytorch has, so it’s difficult to pick out what pertains to distributed, multi-GPU training.

Apex provides their own version of the Pytorch Imagenet example. The documentation there tells you that their version of nn.DistributedDataParallel is a drop-in replacement for Pytorch’s, which is only helpful after learning how to use Pytorch’s.

This tutorial has a good description of what’s going on under the hood and how it’s different from nn.DataParallel. However, it doesn’t have code examples of how to use nn.DataParallel.

This tutorial is really directed at people who are already familiar with training neural network models in Pytorch, and I won’t go over any of those parts of the code. I’ll begin by summarizing the big picture. I then show a minimum working example of training on MNIST using on GPU. I modify this example to train on multiple GPUs, possibly across multiple nodes, and explain the changes line by line. Importantly, I also explain how to run the code. As a bonus, I also demonstrate how to use Apex to do easy mixed-precision distribued training.

Multiprocessing with DistributedDataParallel duplicates the model across multiple GPUs, each of which is controlled by one process. (A process is an instance of python running on the computer; by having multiple processes running in parallel, we can take advantage of procressors with multiple CPU cores. If you want, you can have each process control multiple GPUs, but that should be obviously slower than having one GPU per process. It’s also possible to have multiple worker processes that fetch data for each GPU, but I’m going to leave that out for the sake of simplicity.) The GPUs can all be on the same node or spread across multiple nodes. (A node is one “computer,” including all of its CPUs and GPUs. If you’re using AWS, a node is one EC2 instance.) Every process does identical tasks, and each process communicates with all the others. Only gradients are passed between the processes/GPUs so that network communication is less of a bottleneck. 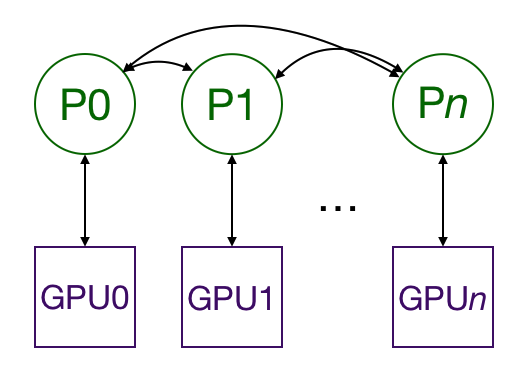 During training, each process loads its own minibatches from disk and passes them to its GPU. Each GPU does its own forward pass, and then the gradients are all-reduced across the GPUs. Gradients for each layer do not depend on previous layers, so the gradient all-reduce is calculated concurrently with the backwards pass to futher alleviate the networking bottleneck. At the end of the backwards pass, every node has the averaged gradients, ensuring that the model weights stay synchronized.

To demonstrate how to do this, I’ll create an example that trains on MNIST, and then modify it to run on multiple GPUs across multiple nodes, and finally to also allow mixed-precision training.

First, we import everything we need.

We define a very simple convolutional model for predicting MNIST.

The main() function will take in some arguments and run the training function.

And here’s the train function.

Finally, we want to make sure the main() function gets called.

There’s definitely some extra stuff in here (the number of gpus and nodes, for example) that we don’t need yet, but it’s helpful to put the whole skeleton in place.

We can run this code by opening a terminal and typing python src/mnist.py -n 1 -g 1 -nr 0, which will train on a single gpu on a single node.

To do this with multiprocessing, we need a script that will launch a process for every GPU. Each process needs to know which GPU to use, and where it ranks amongst all the processes that are running. We’ll need to run the script on each node.

Let’s take a look at the changes to each function. I’ve fenced off the new code to make it easy to find.

I hand-waved over the arguments in the last section, but now we actually need them.

Now, let’s go through the new changes line by line:

Line 13: This tells the multiprocessing module what IP address to look at for process 0. It needs this so that all the processes can sync up initially.

Line 14: Likewise, this is the port to use when looking for process 0.

Line 15: Now, instead of running the train function once, we will spawn args.gpus processes, each of which runs train(i, args), where i goes from 0 to args.gpus - 1. Remember, we run the main() function on each node, so that in total there will be args.nodes * args.gpus = args.world_size processes.

Next, let’s look at the modifications to train. I’ll fence the new lines again.

For the sake of concision, I’ve taken out the training loop from the example here, replacing it with ..., but it is still in the full script.

Lines 4 - 6: Initialize the process and join up with the other processes. This is “blocking,” meaning that no process will continue until all processes have joined. I’m using the nccl backend here because the pytorch docs say it’s the fastest of the available ones. The init_method tells the process group where to look for some settings. In this case, it’s looking at environment variables for the MASTER_ADDR and MASTER_PORT, which we set within main. I could have set the world_size there as well as WORLD_SIZE, but I’m choosing to set it here as a keyword argument, along with the global rank of the current process.

Line 23: Wrap the model as a DistributedDataParallel model. This reproduces the model onto the GPU for the process.

Lines 35-39: The nn.utils.data.DistributedSampler makes sure that each process gets a different slice of the training data.

Lines 46 and 51: Use the nn.utils.data.DistributedSampler instead of shuffling the usual way.

Then, on the other nodes:

for $i \in {1, 2, 3}$. In other words, we run this script on each node, telling it to launch args.gpus processes that sync with each other before training begins.

Note that the effective batchsize is now the per/GPU batchsize (the value in the script) * the total number of GPUs (the worldsize).

With Apex for mixed precision

Mixed precision training (training in a combination of float (FP32) and half (FP16) precision) allows us to use larger batch sizes and take advantage of NVIDIA Tensor Cores for faster computation. AWS p3 instances use NVIDIA Tesla V100 GPUs with Tensor Cores. We only need to change the train function. For the sake of concision, I’ve taken out the data loading code and the code after the backwards pass from the example here, replacing them with ..., but they are still in the full script.

Line 18: amp.initialize wraps the model and optimizer for mixed precision training. Note that that the model must already be on the correct GPU before calling amp.initialize. The opt_level goes from O0, which uses all floats, through O3, which uses half-precision throughout. O1 and O2 are different degrees of mixed-precision, the details of which can be found in the Apex documentation. Yes, the first character in all those codes is a capital letter ‘O’, while the second character is a number. Yes, if you use a zero instead, you will get a baffling error message.

Lines 37-38: Mixed-precision training requires that the loss is scaled in order to prevent the gradients from underflowing. Apex does this automatically.

This script is run the same way as the distributed training script.

Many thanks to the computational team at VL56 for all your work on various parts of this. I’d like to especially thank Stephen Kottman, who got a MWE up while I was still trying to figure out how multiprocessing in Python works, and then explained it to me, and Andy Beam, who greatly improved the first draft of this tutorial.