I got to Logan at 4am yesterday and got to Vancouver 4 flights and 20 hours later. No, that was not the itinerary I’d originally planned. The first thing I did in Vancouver was get Taiwanese food in Richmond. The second thing was to go to the hotel and sleep. So I was pleasantly surprised to not feel too bad for the first day!

Some papers I think are interesting

Combinatorial Bayesian Optimization using the Graph Cartesian Product
Changyong Oh, Jakub M. Tomczak, Efstratios Gavves, Max Welling If you want to optimize over combinatorial input spaces, then it makes a lot of sense to encode them as graphs and use graph kernels.

A Simple Baseline for Bayesian Uncertainty in Deep Learning
Wesley Maddox, Timur Garipov, Pavel Izmailov, Dmitry Vetrov, Andrew Gordon Wilson.
A simple method for approximating the true posterior over neural network weights. Somebody needs to see how this does on the Deep Bayesian Bandits Showdown.

Scalable Global Optimization via Local Bayesian Optimization
David Eriksson, Michael Pearce, Jacob R Gardner, Ryan Turner, Matthias Poloczek
Bayesian optimization often breaks down in high-dimensional spaces because samples are too sparse or the uncertainty is too large near the edges of the search space, leading to over-exploration. Trust-region algorithms overcome this by limiting the search to an area around the current best solution and then fitting very simple models (linear, quadratic) in that region. The region grows or expands based on whether evaluations improve the optimum. Logically, fitting a GP and doing BO within the trust region performs much better.

Learning to control self-assembling morphologies via modular co-evolution of control and morphology
Deepak Pathak, Chris Lu, Trevor Darrell, Phillip Isola, Alexei A. Efros Just as biology began with simple structures (cells) and gained physical complexity in parallel with behavioral complexity, it can be easier to evolve a control policy in parallel with the thing being controlled. For example, we can learn a behavioral policy for simple magnetic arms that allows them to assemble in order to perform complex tasks.

Guided meta-policy search
Russell Mendonca, Abhishek Gupta, Rosen Kralev, Pieter Abbeel, Sergey Levine, Chelsea Finn
Naively training a meta reinforcement learning policy that does well with few examples on new tasks requires an intractable number of samples. Instead, we can train on each of the training tasks individually, and then train the meta-policy using the individual policies as supervision signals.

Weight agnostic neural networks
Adam Gaier, David Ha
Optimize over architectures instead over weights finds networks that are surprisingly good at RL and image classification even when all their weights are the same. 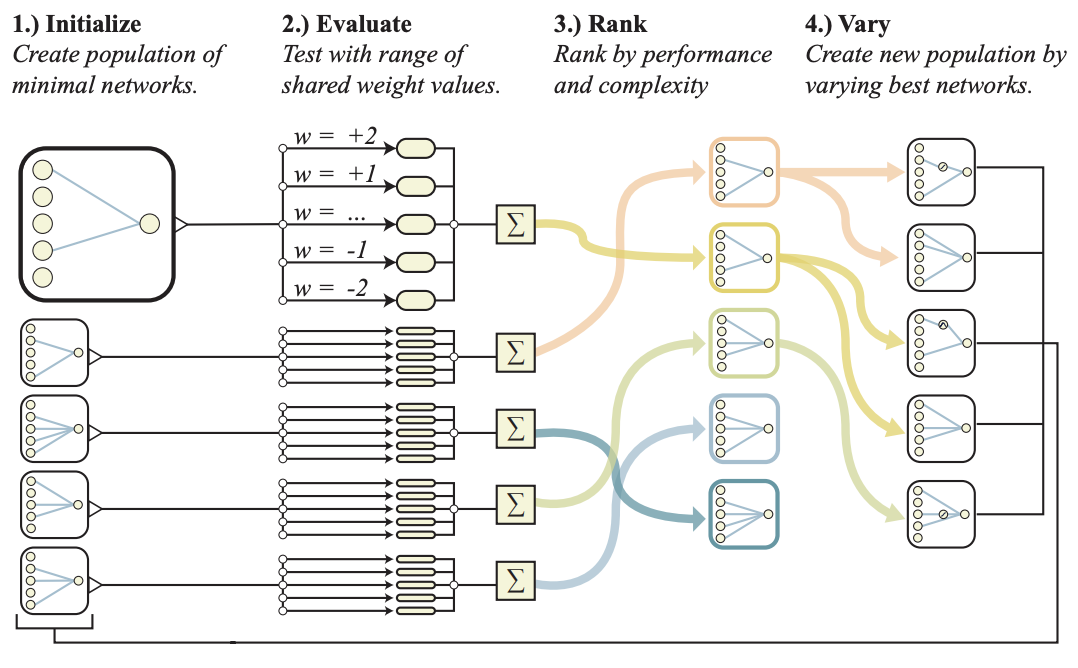